A successful image visually communicates who you are and supports your verbal message. A great image is not a substitute for substance, people can see right through an empty suit.

Color plays an important part in image. The colors you wear activate different emotions and behaviours in yourself and others. The right colors can support your confidence and verbal message and the wrong colors can undermine them. We saw this in the Presidential and Vice Presidential debates this month.

In the First Presidential Debate, President Obama wore a navy suit with a brilliant blue polka dot tie and Governor Romney wore a navy blue suit with a red and blue striped tie. The most nocible colors in both their outfits were in their ties. Let’s take a look at the President’s outfit.

In the first debate, Governor Romney wore a navy suit with a brilliant red tie with blue stripes. 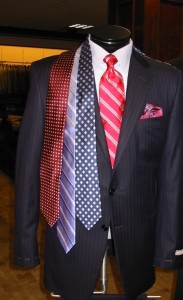 In the second Presidential debate, President Obama wore a navy suit with a burgundy and white patterned tie.

In the second debate, Governor Romney chose a blue and white striped tie and black suit.

So how do you apply color theory to everyday events and activities? Here are some suggestions:

Red is a tricky color to wear because it effects our primal instincts of competition and appetite. It is best worn in sporting and dating situations. It’s a great color to wear on a first date if you want to activate up your partner’s pulse and sexual appetite.

Meeting THE Parents For The 1st Time

If you want to your girlfriends parents to see you as trustworthy and safe, wear blue. It will calm their nerves and yours too!

What you wear to an interview depends on the type of industry and company. Think about incorporating the colors of the company logo into your outfit or the color orange. Orange inspires optimism, confidence, and tolerance and it strengthens teams and communities. It’s a great color to bring people together.

Giving A Presentation/Speaking To A Crowd

Use purple as your new power color. It is bright, so it will make you stand out and attracts attention. It is regal, signifying authority and inspiring loyalty.

Green is a great color creating harmony and relaxation. It will help you get people on your side. Especially if you mix it with a little bit of orange.

Experiment with different colors and see how they effect your results and how you perform. Click here for more about the emotions and behaviors each color activates. Thank you Dillard’s for providing the clothing and location for the story.