This TV segment aired on Great Day Houston on KHOU Channel 11 on May 8, 2013. Thank you Dillard’s for providing the location for the shoot and all the clothing for the models. Thank you Tangie, Amanda and Carrie for modeling and agreeing to wear the “Wrong Dresses” so viewers could learn how to fit their different body types and see what a difference the “Right Dress” can make!  A video clip of the segment and all tips, details and where to buy info are provided below:

The fashion system has a flaw. Designers design clothing for the runway and sell that same clothing to the masses. Models on the runway need volume to fill out their bodies and make a statement on stage. Do you know that a in the fashion world a “Plus Size Model” is actually a size 6? That’s because when a size 6 model wears clothing that adds volume to her body, she looks like a plus size woman. Most mass-market women are looking for a lean look, not a biggerer look. So we are at odds with most of the clothing that is produced because much of it is not flattering for women who are a size 6 or larger. That’s why you get frustrated with the clothing choices that are available.

How to create the illusion of a “better body”

There are 3 steps to creating the illusion of a “better body”:

Here are three models to show how to do this.

Figure Flaw – Tangie feels like her shoulders are broad and her tummy is full. When you apply an hourglass to her figure, you can see that ther real “problem” is that her hips are too narrow for the rest of her proportions. We want to choose a dress that emphasizes her waist and makes her hips appear wider. That will make her whole body look slimmer.

Figure “Flaw” – Amanda feels like her hips are broad. When you apply an hourglass to her figure, you can see that the real “problem” is that her bustling is “too small” and out of proportion with her hips. So her body looks like an “I Dream Of Jeannie” bottle instead of an hourglass. We want to choose a dress that adds the illusion of a fuller bustline and slims her hips.

Figure “Flaw” – Carrie feels like her tummy is full. When you apply an hourglass to her figure, you can see that the her waist is about the same width as her bustline and hips, so her body appears to be a column instead of an hourglass. We need to find a dress that creates the illusion of a more narrow waist and broader bust and hips.

You’ve heard all sorts of descriptions of different body types: apple, pear, banana, triangle, boyish, etc. You don’t have to figure out the name of your body type, just compare your body to an hourglass to see what parts are too small. Then choose clothing that makes that part look bigger. Then you will look slimmer and in proportion.

Dress Yourself Skinny is availabe in all ebook formats online or in paperback on Amazon or at SarahShah.com. Thanks for watching!

Here are a few pics behind the scenes of our shoot at Dillard’s. 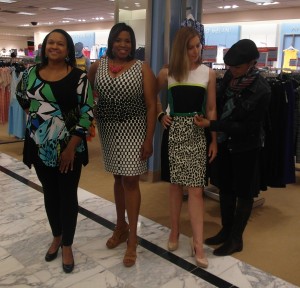 (Left) Sarah and Deborah Duncan warming up before the shoot. (Right) Kiana prepping models for their individual shots. 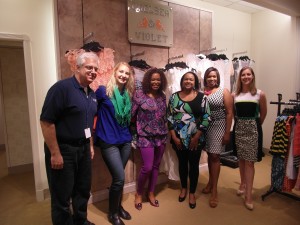 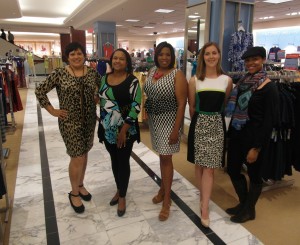 ← TV Segment: Work Wardrobe For Every Budget
Thanks For The Truth, Mike Jeffries! →