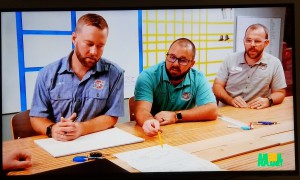 His hair went from looking awkward and thinning to thick and full, just by moving his part. No plugs, men’s club, or recovery time! END_OF_DOCUMENT_TOKEN_TO_BE_REPLACED

The Ministry Of Supply’s Apollo shirt updates a menswear staple with NASA tech that make it practical, comfortable and fashionable. END_OF_DOCUMENT_TOKEN_TO_BE_REPLACED

Men, do you wish your body were different? Here are some tips for choosing clothing to flatter your physique… If you want broader shoulders – wear a light shirt with a dark vest. The lighter color on your shoulders will make them appear broader and the vest will slim your waist emphasizing the difference in… END_OF_DOCUMENT_TOKEN_TO_BE_REPLACED