In 2009, Mr. Shah and I purchased a 52-inch Sony Bravia TV for over $2000 from Costco Wholesale (Model KDL52VL150). We opted for the Sony TV because we thought we were buying a high-quality brand that would last. Boy, were we wrong. Instead we got an education in warranties and customer loyalty.

In 2013, the TV screen failed catastrophically. It turns out that Sony’s 2009 52-inch screens were defective and had a history of failure. In fact, Sony extended the 2-year warranties of some models of 52-inch TVs until March 2015. But they did not extend warranties of TV’s sold through Costco.

We went through a  3-month “customer service” gauntlet with Sony by phone, twitter, and email. ABC-13’s consumer reporter Jeff Ehling even contacted Sony on our behalf to try to assist us (A clip from his TV story is below). 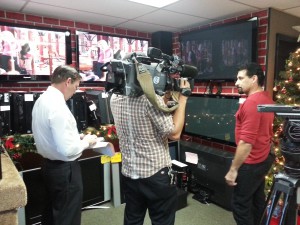 Sony did a great job of appearing concerned on social media and in their interactions with ABC-13. In private, Sony USA customer service delayed, reflected, redirected and in the end refused to repair or replace our TV as they had for others.

When we brought our struggles to the attention of Costco Wholesale, Costco replaced the defective TV within days.

Costco is known for their customer service and lived up to their reputation. Thank you Costco for making it right. In our recent visits to Costco, we noticed that they didn’t have any Sony TVs for sale. Maybe we weren’t the only Costco customers that had trouble with our Sony TVs?

Below are some lessons we learned through our Sony ordeal.

The warranty is the manufacturer’s declaration of the expected lifetime of their product. TVs now come with a 1-year warranty…that means the TVs are expected to last about a 1 year. They may last longer…and that’s a gamble. TVs have become disposable items.

Our TV service center says there isn’t much difference between brands. His advice is to choose a TV with the features you want and don’t pay more than you want to spend annually.

It’s usually best to buy your extended warranty towards the end of the manufacturer’s warranty period so the warranties don’t overlap.

Note: In our recent visits to Costco, we noticed that Costco automatically adds a second year of warranty to all TVs they sell. Also, their extended warranty really extends the warranties rather than running concurrently, so you can buy the extended warranty at the time you buy the TV.

Washing and drying is rough on your clothes. Image Expert Sarah Shah shares some easy tips for keeping your clothes looking newer. END_OF_DOCUMENT_TOKEN_TO_BE_REPLACED

Can you really get a good deal at an outlet store? Yes, you can! Image Expert Sarah Shah takes you to the biggest outlet mall in the US (the San Marcos Outlets) and gives you all the insider tips to find the best deals! END_OF_DOCUMENT_TOKEN_TO_BE_REPLACED

It’s hard to find a great-fitting strapless bra. Image Expert Sarah Shah give her tips for finding a bra that doesn’t slip, slide, spin or make you spill out. END_OF_DOCUMENT_TOKEN_TO_BE_REPLACED

Trying on swim suits can be a trying experience. Image Expert Sarah Shah offers some tips for finding the perfect swimsuit for your figure. This story aired on Stretch Your Dollar with Patricia Lopez on KRTK Channel 13 News Houston. END_OF_DOCUMENT_TOKEN_TO_BE_REPLACED

Quality clothing is worth spending extra for because it lasts longer. How can you tell whether a garment is constructed to last or cheaply made? Image Expert Sarah Shah shares the 7 keys to identify quality fabrication on Channel 13 News, Houston. END_OF_DOCUMENT_TOKEN_TO_BE_REPLACED

The colors you wear activate different emotions and behaviours in yourself and others. The right colors can support your confidence and verbal message and the wrong colors can undermine them. Here is a summary of the effect of color on the Presidential debates. END_OF_DOCUMENT_TOKEN_TO_BE_REPLACED

This story aired on KTRK, Channel 13’s Stretch Your Dollar on October 11, 2011. Here are the tips and details about the outfits included. Fashion Houston is 4 nights of New York style runway shows that are open to the public! Runway fashion is theatrical and over-the-top because that’s what looks good on stage.… END_OF_DOCUMENT_TOKEN_TO_BE_REPLACED

As you loose weight, there’s a transition period when the clothes in your closet get too big, but you’re not ready to invest in a whole new wardrobe. What do you do? Image Coach Sarah Shah shows you 6 pieces to add to your wardrobe to bridge the gap until you reach your goal. These… END_OF_DOCUMENT_TOKEN_TO_BE_REPLACED